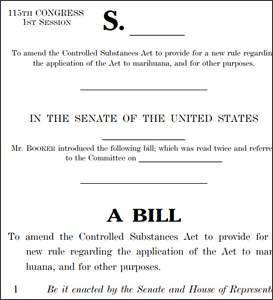 A new congressional bill named “The Marijuana Justice Act of 2017” was just presented today by New Jersey Senator Cory Booker. If passed, it would lift the federal prohibition on the substance. 26 states and the District of Columbia currently have laws broadly legalizing marijuana in some form. This number is only expected to grow as more patients turn to this treatment and as marijuana is being approved as treatment for more conditions, such as PTSD.  But, if The Marijuana Justice Act of 2017 is passed, how should employers tackle this issue in the workplace?

Rob Wilson, human resources and employment expert and President of Employco USA, says, “The federal government still classifies marijuana as a schedule 1 substance, which is the same class as heroin and ecstasy,” he says. “However, many states now permit the use of marijuana, either medically or recreationally. This leads to very murky waters for employers, especially as some states prohibit the discrimination of employees with a medical marijuana card, while other states do not.”

So what should an employer do to navigate this issue?

First, Wilson advises employers to get familiar with their state’s specific legislation. He also says, “If your employees are part of a collective bargaining unit, then it is likely that drug stipulations already exist, including specific limits for drug use. For example, in a recent case, an employee was found to be under the influence while on the job, but he claimed his medical marijuana card gave him permission to use while working. However, a drug test revealed that he was 10 times above his prescribed limit.”

For this reason, Wilson stresses that employers should not just rely on the results of a rapid drug test, as these results do not hold well in a court of law. “If you live in a state such as Illinois that does not permit the discrimination of employees who use medical marijuana, then you should definitely send the drug test results out to a lab in order to back up any fears that an employee might be using more than he should. However, if you live in a pass/fail state, this won’t be necessary.”

Wilson also stresses the importance of updating your employee handbooks to reflect any changes in the law. “Regulations regarding marijuana use are constantly in flux right now,” he says, “So it is wise to stay abreast of these changes and have them reflected in your employee handbook. For example, some employers are changing their policy from ‘zero tolerance’ to ‘zero impairment.’”

Last, Wilson says that a company like Employco can be invaluable in helping employers to navigate these murky waters. “Whether you need help updating your employee handbooks or you want your managers to be re-educated about this issue, we can be of assistance,” he says.