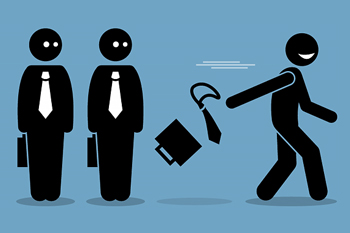 The Great Resignation just became the Greatest Resignation. The January jobs report reveals that a record number of people quit their positions in November… 4.5 million of them, in fact.

Is it true that people just don’t want to work, or what can explain the millions of people who have decided they no longer need gainful employment?

Rob Wilson, employment trends expert and President of Employco USA, a nationwide employment solutions firm with clients across the country, weighs in:

“While much of the media focus has been on the fact that white-collar workers are turning in their proverbial keycards, this latest jobs report actually reveals that it is low-wage workers who are quitting in the millions,” says Wilson. “Sectors like food service and hospitality are the ones who have been hit hardest by the Great Resignation.”

Wilson says this is because fierce competition among employers and the overwhelming need for employees has left workers holding all the cards.

“Look around your town,” says Wilson. “Almost every restaurant and grocery store has ‘help wanted’ signs in the window. People see that, and they see the power that gives them. If they don’t like their current boss, it’s easy to walk out with the comfort of knowing there’s another nametag and another uniform waiting just around the corner.”

But, Wilson cautions, employees may be overestimating their hand.

“What we are seeing right now is that many employers are becoming much more invested in the idea of A.I. replacing real-life employees,” says Wilson. “A.I. has always been considered superior to the real-life worker in the sense that A.I. technology doesn’t get sick, doesn’t show up late during a snowstorm, doesn’t need time off to take care of their kids. And, A.I. certainly can’t get COVID or demand higher pay.”

The longer people stay out of the workforce, the more tempting it will be for employers to replace workers with technology, as well as to streamline and cut down on positions entirely.

“Many people have said that they are quitting their jobs just to try to keep up with inflation. They need higher paying jobs to keep up with the higher cost of living,” says Wilson. “It’s not that people simply don’t want to work: It’s that they want to work a job with a living wage, and until President Biden’s administration finds a robust response to supply chain issues and ever-climbing inflation, people won’t have the confidence needed to stay in a job.”